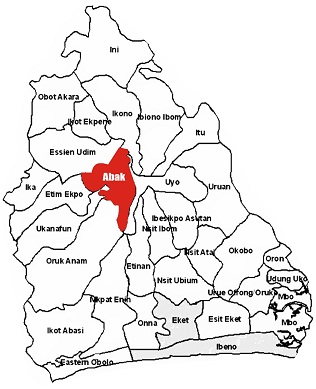 The upcoming local government election scheduled for October in Akwa Ibom State has put many local government areas on frenzy. The recurring word that pervades public space today as a result of the impending election is “zoning”. Everywhere one goes in the State, the word resonates and seems to dictate the direction the pendulum would swing. Abak as a local government in the State is also having its share of this political phenomenon that is sometimes a malady because of the popular view that it easily enthrones mediocrity.

Abak Local Government Area consists of five clans. They include Abak, Otoro,  Afaha-Obong, Ediene and Midim.   For some time now, the chairmanship of the local government has always rotated across these clans. Those who instituted this convention must have considered the fundamental elements of democracy being fairness, justice and equity with the belief that all the component units as defined by the clans would be duly served. So far it has worked well with no hindrance recorded.

It is on record that all the clans have had their due share of a shot at the exalted office thereby completing the first zoning cycle. It was based on this that some stakeholders in PDP which many today describe as a faction, in their wisdom decided to commence another round of zoning with Afaha-Obong taking the first shot. But this came on the heels of earlier reports that the seat had been zoned to Midim clan.  When Afaha-Obong clan was later announced as the beneficiary, the decision which was fraught with suspicion spawned insinuations and innuendos. The suspicion gained currency when some persons said to have some advantage propagated the rumour that the latest zoning to Afaha-Obong clan is a subterfuge /ploy to favour a particular individual.  This swirling rumour has put Abak on tenterhooks.  Unless the air is cleared by the supposed power valve in Abak, the fake story making the rounds that the Abak chairmanship matter had long been concluded in favour of the incumbent would constrict the democratic space and unleash reputation disaster on the highest political office holder in the local government.

Abak being the number one local government area in the State by alphabetical order and sharing proximal advantage with Uyo should also strive to serve as a bastion of democracy in the State. Interfering with the democratic process is arguably a deficit to this concept and proposition.  Everybody, especially from Afaha-Obong including the incumbent, is free to present himself for nomination by the party.  Even though the local government has no record of the second term since the beginning of this democratic dispensation and not even in the previous, there is no law or proviso which precludes an incumbent from re-seeking office. But nobody should foist anyone against the wishes of the people.  An incumbent has the advantage of a scorecard to present. Let us allow his works to speak for him.

It is my conviction that the zoning as so agreed is not targeted at favoring anybody.  I say this because the deputy governor whose name is touted as the man billed to commit the planned rape of democracy is a decent man whose exposure and pedigree forbid him from taking part in such shenanigan.  Those interested in serving the people altruistically including the incumbent and who think they have a good standing with the people should not shy away from the contest with the fear that the nomination/election would just be a mere smokescreen. Abak people should be ready to make their votes count. Those partaking in the nomination of the candidate should ensure that the interest of Abak takes precedent far and above every other consideration.

However, I am burdened with one concern. How do the stakeholders intend to manage aspirants who are not from Afaha-Obong clan but who had already spent humongous sums to purchase forms and undertake consultations as required by the procedure before the magic word, “zoning” came into operation in Abak? This is the dilemma stakeholders must find answers, perhaps with actions that would mollify the aspirants. But this takes: Allow everybody that has purchased the form to participate in the nomination irrespective of the clan he comes from. Whoever wins, that clan would commence the next cycle of zoning. That way, no one would suffer any financial loss having been allowed to give full political expression to his aspiration.