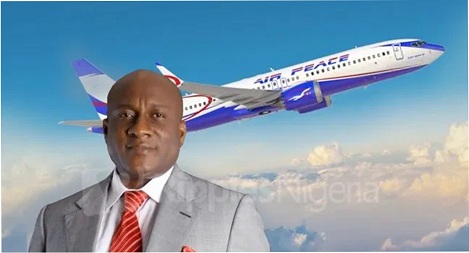 The Chairman of Air Peace, Allen Onyema has lauded the Federal Government’s decision to enforce the principle of reciprocity, stating that the move would reduce the stigmatisation of Nigerian airlines.

According to the News Agency of Nigeria, NAN, Onyema said this in a commendation letter to the Minister of Aviation, Hadi Sirika on Friday in Lagos. The Minister had said that the Federal Government would enforce the principle of reciprocity in granting permission to airlines to resume operations in the country.

Onyema said the decision would elevate the image of the country in the comity of nations and send a signal to international airlines that it was no more business as usual. He said: “You are causing a positive revolution in the aviation world. You have, by this action, brought so much respect to our people and our nation. “Nigerians all over the world are walking tall with enormous pride since the last few hours when the news broke out. “This is the beginning of the end of the stigmatisation of Nigeria and everything Nigerian. God bless you always. From my sincere heart, I have come to appreciate your nationalistic tendencies.”

Onyema said the minister by his conduct and commitment, had ensured that the aviation industry was unencumbered. He noted that Sirika had facilitated the customs duty waiver on aircraft and spares and currently working on the unification of charges paid by domestic airlines.

The chairman also commended the minister for his overall commitment to the aviation industry, from his efforts toward restoring infrastructure at the airports to his intervention in labour issues.

He said Sirika had performed well to protect domestic airlines by spearheading the policy that only Nigerian carriers should engage in evacuation conducted by the federal government.

Onyema noted that its two aircrafts were dispatched to the cities of Chengdu and Beijing respectively for important national assignments on behalf of the governments of Nigeria and China.

The airline chief said the two aircraft departed the Murtala Muhammed International Airport, Lagos on Thursday night. “We have evacuated 313 Chinese nationals in one flight and will return with over 300 stranded Nigerians. The other aircraft will be returning with expatriates at the behest of the federal government. Air Peace is commending the federal government for standing by Nigerian airlines,” he said.