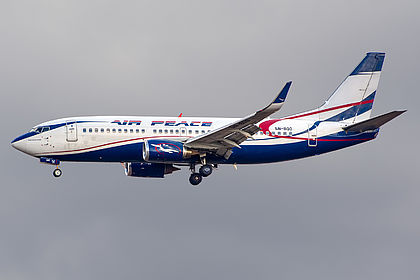 Air Peace threatens to wind up if…

Management of Air Peace has put its entire workforce on notice that, it will not hesitate to wind up its operations if the cabin crew continue to resist the voice of reasoning but take pleasure in embarrassing the company and continue reducing the integrity of the airline in the estimation of its teeming passengers who have been receiving the brunt of sudden flight cancellations thrust upon them without decorum, by the Pilots downing of tools. This caveat was issued by the Chairman/Chief Executive of Air Peace, Barrister Allen Onyema while reacting to the pilots work to rule action embarked upon at the letter part of last week.

Barrister Onyema expressed disappointment that after having intimated the Pilots with the prevailing unfavourable circumstance, which warranted the pay cut which will take effect for 90 days in the first instance. He said the management will return to status quo when passenger traffic improves yet, the Pilot still chose not to fly thus, embarrassing the company and also portrayed the airline in an unpleasant image in the estimation of its esteemed passengers.

Reacting to the Pilots action, Onyema lamented that “it is very unfortunate some of you chose to embarrass this airline at this point in time” through various flimsy excuses such as “refusal to come to work on very spurious reasons”. He itemized some of the actions by the Pilots which he said were unacceptable to the management as “being excused on account of not having done COVID-19 crew training, four months after it started. Others even refused to even come to work on very spurious reasons” among others.

The Chairman reminded the Pilots that for the better part of 2019, majority of them flew an average of 25 hours a month and the company did not withhold their salaries and allowances and all were paid promptly.  He, however, noted that “now the Pandemic has set in with debilitating effects on every airline worldwide, Air Peace not left out” and the airline pleaded for slight readjustment in salary which will not be permanent but will be reversed as soon as passenger traffic rebound, yet the esteemed passengers were sadly being made to bear the brunt.

Barrister Onyema in his memo to the Pilots wondered how the Pilots refused to understand and co-operate with the salary cut which will soon be reviewed. He said presently the airline has not achieved 40 per cent of its load factor since the nation’s airspace was opened and travel resumed.

Onyema also adduced another factor he expected the Pilots should consider and cooperate with the management was the fact that the airline was merely able to do 28 flights instead of 110 flights just before the closure of the nation’s airspace in March, 2020

Barrister Allen Onyema, Chairman, Air Peace given standing ovation at the House of Representatives. This, the Chairman expected was enough ground for understanding and cooperation but was overwhelmed and posed rhetoric questions thus, “where is the money going to come from? Have we done things others are not doing or even worse? Is it the way to reward the airline that has changed your fortune in your chosen career?

He further categorically disclosed that, “the current revenue generated since the resumption of flight in 8th July, 2020, cannot even pay the current salary for this month” and also retorted that, “Pilots are not the only persons working here. Other departments are equally human beings and deserve to earn some wages too”

The Air Peace helmsman averred that “the truth is, and this is very bitter, we cannot go back now to yesterday. Until the factors that brought about this situation abate, it is nobody’s fault” hence, the Pilots are expected to bear with the airline.

The Chief Executive of the foremost airline in Nigeria who by the tone of his memo was seriously irked by the Pilots’ action said, “my heart bleeds that very many of you could brazenly adopt this route {work to rule} to embarrass the airline and force it to do the impossible. It is unfortunate”. Showing extreme concern and emotion for the airline’s numerous passengers in the nooks and crannies of the country, Allen Onyema urged the Pilots to understand that, “we need to know what to tell our passengers. If anyone is not flying please communicate same directly in writing to HR or to Flight Operations so we could make a decision and move our passengers to other airlines for such a flight or flights”

He made it clear the salary cut was not out of malice or greed but a reflection of the prevailing operating environment for now when he wrote that. “The effects of the pandemic are here for everyone to see”

The Air Peace owner sounded sarcastic in concluding his memo, but of which the industry stakeholders would rather preferred to be a satire when he wrote, “I am very sorry, with all this company has done to Pilots especially, we will not accept blackmail even if it means closing down the airline today, yes, I swear on it”.

On contact, the President of the Flight Crew Association of Nigeria, FCAN, Capt. Robert Roland, for a reaction, if there had been any intervention on the impasse, he said the association’s steering committee was saddled with such intervention and until they conclude he would not be able to comment.

However, some group among the passengers at the airports expressed sadness over the development from the airline, saying everyone was expecting Air Peace to launch international operations immediately after the pandemic. Another traveller at the Murtala Muhammed Airport terminal one, MMA1, Chief Harry Esamah, said it was the height of disappointment as the airline performed creditably well at the heat of the pandemic, evacuating Nigerians, Israelis, Indians and other nationals. The closing shop should never be an option for the management.

Akolade Busari, an Engineer who also holds a Private Pilot License from South Africa, said that all well-meaning Nigerians especially the financial institutions the airline bank with should rise to the occasion and work out modalities for a lifeline to the airline and move past this stage since the future is very bright for Air Peace.

Another stakeholder, Yisa Mohammed Tukur, asked when the much-touted palliative by the federal government will be paid to those concerns so as to save jobs and save the air travel industry in Nigeria from collapse. He said in other climes, promises of support heard at the heat of the pandemic are now being fulfilled by governments to the airlines.

He advised that delay by the federal government to offer promptly the much-touted stimulus could be very dangerous as the statement is very true that, a stitch in time saves nine. He argued that the stimulus could become useless and of no effect, if not promptly disbursed to those that are mostly in need and further safe aviation in Nigeria.

Previous: Who is Afraid of the NDDC Forensic Audit? Part Two – Group
Next: COVID-19 DAILY UPDATE