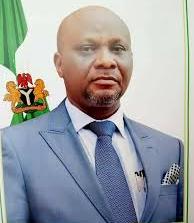 Accountant General of Akwa Ibom State, Pastor Uwem Andrew- Essien has disclosed that 2020 accounts of the State Government would get to the House of Assembly before June.

Pastor Uwem Andrew- Essien made this known Friday, 13th September 2019, when he received the executive of the Chartered Institute of Taxation of Nigeria, (CITN) Akwa Ibom State branch who paid him a courtesy visit in his office. The Accountant General said Accounts of the State Government under the watch of Governor Udom Emmanuel have been published on time and circulated to relevant bodies saying, modalities have been put in place to ensure  that accounts of 2020 are published earlier than previous years. He maintained that Governor Udom Emmanuel is running a Godly and transparent administration where financial statements are published for public consumption.

Pastor Andrew Essien challenged accountants in both public and private sectors as well as students seeking admission into Universities to take up taxation as Profession so it’s impact can be felt more. The Accountant General lauded the cordial working relationship existing between his Office and the Federal Inland Revenue Service saying ” the gap has been closed upto 90 percent”.

He praised the former Accountant General of the State, Sir Udo Isobara for remitting the largest chunk of tax during his tenure. Pastor Andrew- Essien congratulated the new executive on their appointment and called on them to work hard to leave behind lasting legacies for posterity.

While pledging his support towards the successful hosting of the upcoming Uyo CITN MPTP billed for 8th October, 2019, the Accountant General called on them to mobilize members from MDA’s  as well as the private sector in order to have an impressive turnout at the event.

The chairman, Chartered Institute Of Taxation of Nigeria, Uyo and District Society, Elder Edemeka Udosen expressed gratitude to the Accountant General for ensuring financial reporting and transparency of Akwa Ibom State Government finances and management. Elder Udosen  acknowledged  the support of Pastor Andrew- Essien  to the body over  the years  and intimated him of the forthcoming  Uyo and District  Society CITN MPTP  scheduled for 8th October  2019 and sued  for his  support  to ensure the successfully hosting of the event.

2019-09-15
admin
Previous: The Humanity of Dr. Udeme Nana
Next: Monica Lauds FG for approving the Construction of Ebonyi International Airport