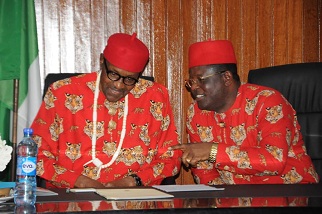 It was a galore of celebration and victory dance throughout Ebonyi State on 30th January 2019 immediately after the All Progressives Congress Presidential rally in Abakaliki, the State capital of Ebonyi State when it became obvious that Apostle Dr Dave Nweze Umahi the indefatigable Governor of Ebonyi State reelection bid received the blessings and approval of all the opposition political parties particularly the APC in Ebonyi State.

This position became imperative after it took much pleas from the National Chairman of APC, Comrade Adams Oshiomhole for Senator Sunny Ogbuoji the APC Flag -Bearer in Ebonyi State to be recognized during the APC rally by most of the key political actors of APC in the State and even when he was being introduced it was the shout of UMAHI! UMAHI! UMAHI!!!  Ka Anya ga eso (It is Umahi we will follow) that was being chorused by those that attended the rally.

Even when Pastor Eze Nwachukwu Eze the APC State Chairman tried in vain to castigate the administration of Engr. Dave Umahi that the administration has not achieved anything for the State both President Muhammadu Buhari and some of the important dignitaries busted into uncontrollably laughter indicating that Pastor Eze has succeeded in making himself a laughing stock. These APC chieftains will be wondering how any sane man could utter such a statement that Governor Umahi who was praised few minutes before the commencement of the rally for being the face of good governance in the country that he didn’t achieve anything in the state.

Lady Monica Ada Chidinma Eze the Founder and President of David Umahi Nweze Akuburoah Ebonyi Transformation Agenda (DUNAETA), a Non Governmental Organisation (NGO) promoting and projecting good governance and virile democracy in Ebonyi State made these remarks in a press statement circulated to the Media in Abakaliki on Thursday. Monica, who expressed happiness, stated that it is only those from the dark kingdom that could visit Ebonyi without acknowledging the great feats and transformation that the administration of Engr. Umahi has brought to the State. “Truly, Governor Umahi is an enigma and epitome of what a leader should be  and those of us from Ebonyi State thank God for the special gift he gave to us through the coming of his son, Apostle Umahi and no effort or plot to truncate God’s vision for Ebonyi State through him will succeed”, Monica said.

She commented Dr. Ogbonnaya Onu the former Governor of old Abia State and incumbent Minister of Science and Technology and a key stakeholder in the State for the maturity he exhibited during the rally acknowledging before the world that President Buhari is not only a good friend of Ebonyi State but that Ebonyi State was the first State in Nigeria apart from Katsina State his home state where he slept, ate, drank and spent two days commissioning projects after projects.

The DUNAETA President eulogized President Buhari for his special love for Governor Umahi and pleaded with him to allow a free and fair election in the State as we have only one creditable gubernatorial candidate in Ebonyi State and that is Apostle Engr. Dave Nweze Umahi  and anybody working against his reelection bid is an enemy of the State. Monica further commended Mr. President for assuring the government and people of Ebonyi State of his preparedness to refund monies the state spent on federal projects after the review committee concludes auditing of the projects. President who stated this during an audience with Governor David Umahi and other stakeholders at the State Government House, Abakaliki also commended Governor David Umahi for the infrastructural development in the State.

Monica highlighted that President Buhari told the traditional rulers that his administration’s plans to invest in agriculture was deliberate in order to improve the living standard of Nigerians and create alternative revenue for the nation. “But subsequently, we got drunk with oil money and abandoned what kept us intact. But we are going back to that (agriculture),” President Buhari said. He assured the monarchs that the South-East would benefit from second Niger Bridge when completed as it would enhance movement of goods and services in and out of the region.

In his remarks, Governor David Umahi stated that the south east geopolitical zone have benefited from federal government projects and added that the federal government’s agricultural programme has benefited the state immensely as the state has comparative advantage in agriculture and solid minerals compared to other states within the zone and concluded by thanking the President for approving the commencement of Ebonyi salt production.

In endorsing President Buhari and Governor Umahi the chairman of traditional rulers Council in Ebonyi State, Eze Charles Mkpuma said, “We appreciate your dogged determination to maintain utmost security of the country, especially your effort in eliminating Boko Haram and fight against corruption, which has brought respect and integrity to the country in the comity of nations. “We believe that your robust relationship with our son, the Governor, and your love for him and the state will surely earn you votes in Ebonyi State, irrespective of party differences.”

Ada Ebonyi commended the 140 Ebonyi traditional rulers that endorsed Buhari and Umahi for 2019 and concluded that with this endorsement; the coast is now clear for the proper victory celebration come March 2nd 2019.

Monica Eze who is also the Technical Adviser (TA) on Media to Governor Umahi assured Senator Ogbuorji that she will set up a fund raising committee comprising herself as Chairperson, Hon. Collins Eze and Hon. Solomon Woba and two other members of DUNAETA to raise enough funds to cushion the effects of whatever expenses Senator Ogbuoji may have incurred so far in running his makeshift campaigns.

2019-02-02
admin
Previous: 2019 Election: We will give meaning, purpose to the ballot – A’Ibom INEC REC Assures
Next: Nsima Ekere is the Messiah – Senator Akpabio