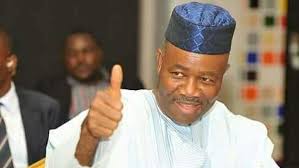 Between 2007 and 2015, Chief Godswill Akpabio took charge of Akwa Ibom State with a promise and readiness to transform the lives of Akwa Ibom people, transform the Akwa Ibom landscape and the circumstances of an average Akwa Ibom person. He did so with patriotic anger and zeal. During this period, Akwa Ibom people witnessed not only the beginning of a new chapter in the socio-political history of the state; they did behold the actualization of God’s will for the state. In his maiden address to Akwa Ibom people after the April, 2007 general elections, Governor Akpabio assured the people that his mandate is a torch that will illuminate path of development, empowerment, education, social justice and infrastructural renaissance.

He promised the people that he was committed to implementing his party’s programmes and manifesto in line with the needs of Akwa Ibom People. He vowed to establish an administration that will foster love, unity and engender real and touchable prosperity and harmonious co-existence amongst the people. Also within this period, the story of Akwa Ibom evolved to that of transformation from perennial despair to hope, to a new level of destination and indeed to a story of uncommon transformation.

In 2011 while on a visit to Houston, United States of America, the Governor Akpabio was so confident that he told Nigerians and indeed Africans in the Diaspora how he had invented a new Akwa Ibom with promised transformation that will take place under his watch. He stressed that the transformation of Akwa Ibom State was as a result of “Uncommon faith in a man by an uncommon people with an uncommon destiny, a people who had been scared in the heap of poverty, a people emasculated by infrastructural paucity, a people hunted by history, the history of denial and unbridled trauma and indeed a people who had been cast down by men but not forgotten by God”.

True to the story, Akpabio’s anger did provide the impetus and the compass defined the direction of his development-oriented administration which led to transformation of Akwa Ibom State into a model in Nigeria. Today the fruits of the socio-economic transformation that Akpabio planted are evidenced everywhere, in every nook and cranny of the state, they are there to be seen, touched and felt as a testimony to his promise. Governor Akpabio’s administration was rated high for the superlative infrastructure it engendered in Akwa Ibom and which advanced the major and peaceful destination in Nigeria whereas before the advent of his government, most roads across the state were in deplorable conditions which made access to remote areas very difficult much as driving in the cities was herculean. But armed with a vision of making Akwa Ibom an Industrial hub in the West African sub-region, Akpabio unleashed a robust road rehabilitation and construction agenda immediately he entered the scene as Governor.

During that regime, Akwa Ibom State, the dream of our forebears, never sized form trading on the fast lane of development, with unprecedented record of achievements in virtually every sector; from spiritual engagement, investment in tourism development, Agriculture, Youth empowerment, sports development, rural water supply, urban capacity development, urban renewal, housing development, free, qualitative and compulsory education, environmental sustainability, security of life and property, healthcare, road infrastructure, rural development, the Ibom International Airport, Godswill Akpabio International Stadium etc. Akwa Ibom played a leading role in the political economy of Nigeria. Indeed it was eight years of unparalleled records of achievements. Achievements witnessed, touched and affirmed by eminent personalities within and outside Nigeria and attested to by Civil Society. Encomiums were lavishly poured on Governor Akpabio by all categories of eminent visitors to the state, not just for the sake of it, but in utmost appreciation of his outlandish performance throughout his regime. Former President Goodluck Jonathan, GCFR, was so enthused during one of his numerous visits to the state that he had this to say: “One thing that is very clear from the airport till now is government of Akwa Ibom is focused. I have seen quite a number of projects, some inspected. The airport, roads, e-library, underground drainage system, Government house and many others, but one thing I note is that the projects I have seen are not just projects, but are of very high quality”. He added at another instance that he is pleased with Governor Akpabio because he is not playing politics with projects.

Erstwhile Central Bank Governor, Mallam Sanusi Lamido Sanusi, in a highly dispassionate appraisal of Governor Akpabio had observed during the CBN Award on Governor Akpabio as Best Governor in Infrastructural Development, that “the availability of infrastructure is critical for the socio-economic development of any state”. Former Governor of Anambra State, Peter Obi, CON, had this to say: “This is my third time of visiting Akwa Ibom State, each time I come here, I thank God that we have a place in Nigeria which we now feel like we are in overseas. What is happening in Akwa Ibom you might not appreciate because you see it every day but know that everywhere in Nigeria and beyond, whenever they are taking about states that are doing well, Akwa Ibom will top the list”.

Former Governor Mauzu Babangida of Niger State said in his enthusiasm, “I knew the impression of Uyo as a little village with one road cutting across the city but today, not only has it become a full-fledged city, I saw streetlights on the dualised streets. Believe me, one of the things you will notice when you come to a new place as a sign that people are well to do is when you see buildings progressively under construction all over. Yes Uyo has come of age and now they are beginning to enjoy the wealth that God has given them, and I give Akpabio the credit for that because I have seen actions and development. He spends the money in accordance with the rules and regulations”.

In his own commendation, Jonah Jang former Governor of Plateau State remarked; “What I have seen is incredible that within this short period of five and a half years. Uyo has turned out to be what it is and I am told of what has been done in various local government areas. I think this time the people of Akwa Ibom Should thank the Almighty God for giving them a son who has a heart of the people, who has everything that it takes; the vision, the intellectual to be the kind of leader Nigeria needs”.

Former Governor of Bauchi State, Alhaji Adamu Muaza said that Governor Akpabio is the kind of governor every state in Nigeria should strive to have, that he has seen what Akpabio has done, that he himself is impressed. These were testimonies from fellow state Governors. Governor Akpabio also committed a large chunk of funds from the state’s allocation on federal roads in the state expecting quick refunds from federal government but got very little refund from the Federal Government. These refunds would have been added to greater infrastructural developments in the state.

In his own verdict, former President Olusegun Obasanjo GCFR had this to say, “when you want to know what is happening in a place, or how well or not so well a man is doing, even the Bible says from the mouth of two or three we will establish the truth, so from the mouth of two or three witnesses, in my case here, I have established the truth of your performance from four witnesses. And if you want to do it very well, you want to establish what the position is try to know from those who are pro, those who are anti and those who are neutral, then you get the true picture. Those who are pro say, you are doing extremely well, those who are neutral say you are doing well, those who are anti say you are doing well but have a lot of fund from the federal government. And I say to them yes, some people had a lot of money from Federal government but they do not use it well. So we thank God that we have someone who is getting a lot of money from the Federal Government and is using it well. I have gone round with you (Akpabio) to see things with my Korokoro eyes and from what I have seen; you are doing extremely, very well.

Stunningly, it is as if Akpabio knew when he was asked in June 2014. What his experiences were as the chief helmsman in Akwa Ibom State, when he said: The past seven years of my administration has been full of sadness and joy, that the past seven years had been like the experience of Jesus Christ, who came to redeem the world and bring salvation to mankind, but was totally demonized by the Pharisees and Sadducees. That Christ was accused falsely of all sorts of things and at the end of the day, was innocently killed in his efforts to bring about change that he was misunderstood by many and was vilified. Today Jesus Christ is and has remained the hope of mankind.

Previous: Nigeria, Drug Cartels and Xenophobia in South Africa
Next: The Humanity of Dr. Udeme Nana