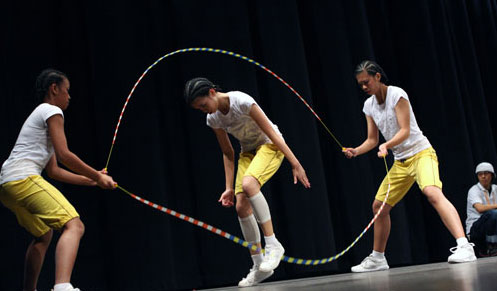 The Nigeria Rope Skipping Federation (NRSF), an apex body of jump rope skipping sport in Nigeria is set to host African nation in a training workshop orgainised in an effort to showcase spectacular talents, skills among youths in African nations that are new entrants with the understanding of introducing new gimmicks and styles to other rated nations who have been skipping for so long.

In a statement made available to urban express news online through the federation’s secretary general, Mr.Sesan Olukoya said Lagos state in Nigeria and Accra in Ghana were nominated initially as two likely hosts of the event at the African leaders meeting during the world jump Rope championship and camp which took place at Orlando, Florida in the United States last year where other African nations insisted it has to be Lagos.

He said back home, everybody is indeed proud that Lagos as the centre of excellence, where all is happening within and around the country remains a toast of Africans choice of visiting, adding that it’s certainly a thing that one should  be proud of, coming to one of its best cities within African continents, “We are indeed ready to host African nation’s officials and its athletes as well as international coaches and officials from the United Kingdom, France, and the United States that are expected to honour our invitation for the workshop”.

Olukoya said Liberia, Ghana, seria-Leon, ivory-coast Benin and Togo have already indicated interest to attend the workshop adding that its plans are still on to bring in other West African nations that are willing to participate in the federations workshop. He said guest from Kenya, Uganda and South-Sudan will also be part of the workshop. “Botswana, Mozambique and South-Africa would definitely be well represented”

Olukoya also believe that some of the significant objectives of having the workshop is developing talents of Africa youths that is expected to be at the workshop essentially to help facilitates youngsters with talents with the aim of nurturing them towards self reliance, enhancing physical fitness, good personal growth and development and also clear the  youths off the street with the understanding of preventing from exhibiting crime device intention and instead create a better political platform for the youths through sport of this kind.

He said part of the advantages is the purpose of the workshop where it would be useful in helping to create a pool of young players for the nations of Africa, create a sustainable system, keep youths fit always, create temporary jobs for the state players acting in school clubs coaches, “We are hoping that it would also help spread the game of jump rope and skipping around the continents of Africa where it will be trailblazers for jump rope sipping development in our school’s communities and the nation at large while it will also help to reduce juvenile delinquencies among our youths.”

Dignitaries expected at the workshop event are Senator Mrs Oluremi Tinubu, who indeed stands as the distinguished guest of honour while its special guest of honour  is the Dr Eke Kingdom. Other dignitaries include  Rev Mother Esther Abimbola Ajayi, Hon Femi Gbajabiamila and the Lagos state governor, Mr Akinwunmi Ambode who indeed happens be the chief host. The event is expected to take place in Rowe Park, Mobolaji Johnson sports Hall on April 18, 19 and 20, 2019.

Culled from The Nation