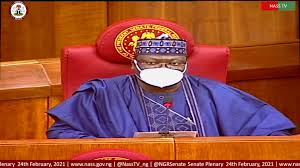 Senator Nwaboshi, who was speaking during the oversight visit of the Senate Committee at the new NDDC headquarters in Port Harcourt, described the reports as untrue, saying that he was reliably informed that no such order was issued.

“The Interim Administrator has been reaching out, communicating and discussing with the Senate,” he stated, adding: “He opened discussions with us. We are happy that he accepted that there is a need for cooperation and collaboration for Niger Delta to move forward.”

The Senate Committee chairman, however, disclosed that the Senate was still investigating the issues connected with the NDDC COVID-19 palliative funds, adding: “We are aware that the NDDC Interim Administrator was not part of the NDDC leadership team at the time.”

He stated that the NDDC boss was appointed Acting Executive Director, Finance and Administration of the Commission in August, 2020, “a month after the National Assembly began probing the matter. He was not a party to any of the transactions on the palliatives.”

Welcoming members of the Senate Committee, to the NDDC permanent headquarters, Mr. Akwa commended the Committee for their unflinching support for the NDDC, noting that the support was critical for the development and progress of the Niger Delta region.

Akwa said: “For about a year we had a misunderstanding with some members of the National Assembly. The members are noble men and they had to bend backward to bury the hatchet in the interest of the region. When I went to the joint session of the Senate and the House of Representatives to defend the 2020 budget, they cooperated with us. I assured them that we will insist on doing the right thing at the NDDC.”

The Interim Administrator later took members of the Senate Committee on a tour of the newly completed headquarters complex.