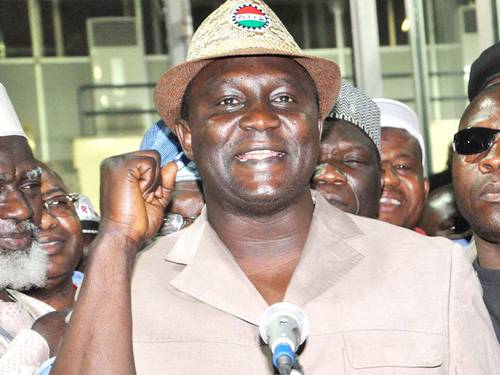 The attention of the Rivers State Government has been drawn to an audio message being circulated on the social media and credited to Comrade Ayuba P. Wabba, President of the Nigeria Labour Congress (NLC)

For the records, the said Comrade Ayuba P. Wabba is the 3rd defendant in Suit No. NICN/LA/305/2020 (Attorney-General, Rivers State v. Nigerian Labour Congress and 5 Others) now pending before the National Industrial Court, Lagos (sitting as a vacation court).

In the said audio message, Comrade Ayuba P. Wabba made a number of spurious, unfounded and malicious allegations against me and the Office of the Honourable Attorney-General of Rivers State in relation to the proceedings in the aforesaid Suit No. NICN/LA/305/2020 with a view to ridiculing the judicial process and impugning the authority and integrity of the court.

It must be emphasized that ordinarily, it would not have been necessary to honour Comrade Ayuba Wabba with a response.

However, given the seriousness of the issues raised in his putrid audio message as they appertain to our court of law and the administration of justice, it has become absolutely necessary to set the records straight.

The allegation made by Comrade Wabba that the enrolled Order of Interim Injunction has not been served on the defendants is therefore not only mendacious but also laughable. Comrade Ayuba Wabba claims that the organized labour is not embarking on strike action but rather a “national protest in Rivers State”. The word “protest” is defined by the Oxford English Dictionary (2nd Edition, 2010) page 601 to mean inter alia: “an organized public demonstration objecting to an official policy”.

The adjective “national” which qualifies the protest being threatened by the organized labour in Rivers State, underscores the fact that protesters will be drawn from across the Federation of Nigeria. Clearly, a national protest will invariably occasion or involve the stoppage, disruption and/or interference with the provision of service and other works by members of the organized labour in the Civil and Public Service of the Government of Rivers State contrary to the terms of the subsisting Order of Interim Injunction granted against the defendants including Comrade Wabba. Nothing could be more contemptuous of the honourable Court! Comrade Wabba has further claimed that the Honourable Attorney-General of Rivers State has “boasted that he can procure any Order of the Court at will”. This allegation which is the product of a warped mind shows that Comrade Wabba has no scintilla of respect for the judicial process in our courts.

First, Orders of Court are not “procured” but issued, made or granted by the court as the circumstances of each case may justify. Second, the Honourable Attorney-General of Rivers State has never met Comrade Wabba in his life and could not have boasted to him about his capacity to obtain court orders at will. The statement is thus a figment of Comrade Wabba’s imagination contrived to give colour to his threatened act of brazen illegality. Finally, the Hon. Attorney-General of Rivers State has never boasted before any official or member of the organized labour in Rivers State that he could “procure any Order of the Court at will” either as alleged or at all.

Comrade Wabba should inform Nigerians whether any complaint has been lodged with the Police against the Honourable Attorney-General in respect of the alleged abduction. 9. For the avoidance of doubt, organized labour is not a State within a State. On the contrary, it is a body created by law and is bound by the same law that gives its existence legal validity. The case of the Government of Rivers State before the National Industrial Court is that the organized labour cannot declare a strike action in Rivers State without strict compliance with the conditions precedent prescribed in the Trade Disputes Act, Cap, T8, Laws of the Federation of Nigeria, 2004 and the Trade Unions Act, Cap. T14 Laws of the Federation of Nigeria, 2004. Our commitment to the enthronement of the rule of law in our State rather than rule by force informed our decision to seek judicial redress against the organized labour. 12. The Government of Rivers State will not engage in any act of illegality in confronting the monster of lawlessness which the organized labour now appears to epitomize.