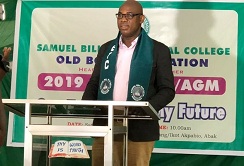 The event which witnessed a novelty football match which ended goalless also saw the deployment of electronic voting by the association in the election of new executive members to run its affairs. The election saw the emergence of Mr Churchill Tom Udoh and Mr Esitekom Ekpo as President and Secretary General respectively.

In a statement signed by the Chairman of the Planning Committee, Hon Uwem Udoma, one of the landmark decisions taken at the end of the AGM was the resolve to restart the Secondary School Division of the College which was shut in 1991. It could be recalled that the famous Qua Iboe Church owned Samuel Bill Theological College(SBTC), in Abak LGA had two divisions; the Samuel Bill Theological Division named after it’s founder, Late Rev. Samuel Bill( founder of Qua Iboe church, Nigeria) and the Secondary School Division, “the Secondary division was founded in 1979 but regrettably, it was shut in 1991,But to the glory of God, one of the landmark decisions taken at this year’s Annual General Meeting of the Old Boys Association was to restart the Secondary School Division which most of us passed through”, said Hon Udoma. He commended the Akwa Ibom State Government, AKSG, for its intervention in the reconstruction and turnaround maintenance of the College, expressing delight that the decision of the State Government to reconstruct the College’s Dinning, Assembly Hall, Staff Quarters, class rooms, hostel, provision of Borehole facility, internal road uplift, etc, has made it possible for the recommencement of academic activities at the Samuel Bill Secondary School by September 2019 as approved by the Qua Iboe Church Conference.

Hon Udoma thanked the Provost of the Theological Division of the College, Rev Iniobong Udoudo, for sustaining the vision of its founding fathers and commended all the Old Boys of the College who attended the AGM as well as all the teachers who taught them in their secondary school days, a foundation he noted culminated in their growing up to become useful, successful members of the society and a pride to their alma mater.

According to the former Deputy Speaker of the Akwa Ibom State House of Assembly, the 2019 Samuel Bill Old Boys Association Reunion which was rounded off with a Thanksgiving Service at Qua Iboe Church, Ikot Akpabio, ABak LGA, also had in attendance the first ever NYSC Corper who was posted to the school, now Professor of History, Professor Kemi Rotimi, and some old boys of the institution which include, newly elected President of the association and CEO of Wastegate Conglomerate, Lagos, Mr Churchill Udoh, the Registrar of the University of Uyo, Mr Aniedi Udofia, the Executive Chairman of Abak LGA, Barr Imo William, the Executive Chairman of Ukanafun LGA, Mr Uko Idiong, Mr. Nse Ibanga, London, among others. The Samuel Bill Old Boys Association has its chapters in Abak, Uyo, Eket, Port Harcourt, Calabar, Lagos and Abuja amongst others.