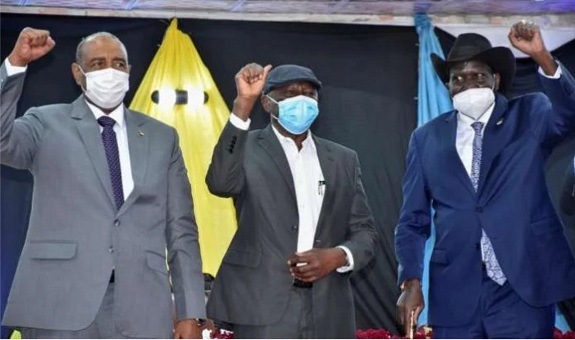 The Sudanese government and a major rebel group from its southern Nuba Mountains on Sunday signed a document that paves the way for a final peace agreement by guaranteeing freedom of worship to all while separating religion and the state.

The signing is viewed as a crucial step in efforts by the power-sharing government headed by General Abdel Fattah al-Burhan to reach accords with rebel groups across the country and end decades of conflicts that left millions displaced and hundreds of thousands dead.

Last year Sudan signed a peace agreement with many groups, including the Western region of Darfur. But a key faction of the Sudan People’s Liberation Movement-North (SPLM-N) led by Abdelaziz al-Hilu, did not join in last year’s agreement because it stuck to its demand that Sudan dispenses with sharia law and becomes a secular, democratic state.

Sharia law was first imposed in Sudan in 1983, and maintained by the now-deposed president Omar al-Bashir for the duration of his 30-year-long Islamist rule. The so-called ‘Declaration of Principles’ signed on Sunday in South Sudan’s capital Juba between Sudan and the rebel faction means talks on a final accord can now begin.

The declaration stated that both sides agreed to “the establishment of a civil, democratic federal state in Sudan, wherein, the freedom of religion, the freedom of belief and religious practices and worship shall be guaranteed to all Sudanese people by separating the identities of culture, religion, ethnicity and religion from the state.”

“No religion shall be imposed on anyone and the state shall not adopt official religion,” it said, without specifying that Sudan would become a secular state, a controversial issue in the country’s transition.

Aman Amum, the Secretary-General of SPLM-N told Reuters on Sunday that reaching a consensus on the role of religion in Sudan’s politics was a breakthrough that would now accelerate talks towards a final peace settlement.

Sudan had now “accepted the separation of religion from the state,” Amum said. It had been unclear whether Sudan’s military, which shares power with a civilian executive branch, would support any such moves after years of backing Islamists. Civilian Prime Minister Abdalla Hamdok signed a similar declaration with al-Hilu last year.

Sudan has been wracked by conflicts for decades. After the oil-rich south seceded in 2011, an economic crisis fuelled protests that led to the overthrow of Bashir in 2019. SPLM-N has been operating in a region inhabited by minority Christians and followers of African beliefs who complain of long discrimination under Bashir’s rule. Amum told Reuters both sides would start negotiating over other issues like power-sharing and the fate of combatants.

After Sunday’s signing, only one rebel group – a faction of the Sudan Liberation Army (SLA) – remains a major security challenge to the government in Khartoum led by Abdel Wahed el-Nur, SLA is active in Jebel Marra in Sudan’s Darfur region.