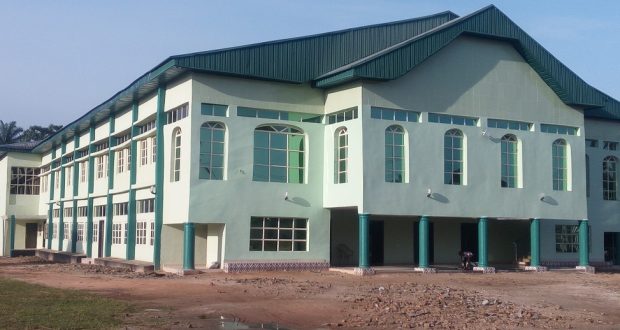 In demonstrating God’s glory on earth, worshippers of God in the Apostolic church Nigeria; Ndot Area have portrayed their unfeigned love for God by completing splendiferous structure, a master piece of an architectural craft, which is meant to add to the glory of the Almighty God. The multi-million naira edifice, which is one of its kinds in Oruk Anam local government area and indeed, Akwa Ibom State has in its incomparable grandeur spurred believers’ hope in the area of the many glorious mansions waiting them. In its lemon colour paint, the building stands tall in Obio Ndot, which attracts the praises of all to God for raising men up to establish His glory on earth.

The green roofed building represents the fertility of God’s blessings and the expansive white ceiling and tiles promote the dignity and the glory of God. The tiles alone worth millions of naira were aimed at fixing something that will be durable. The well designed ceiling with expensive wood also adds to the beauty of the house.

The five thousand sitting capacity church also has the down floor and the gallery, which is carefully decorated with silver-plated rails. Noted by the Area Superintendent, Apostle E. O. Akpan, “the rails alone worth millions” explaining further, he pointed to the quality nature of rails and how he does not settle for anything meant for God, “I like doing something that is permanent and durable for God”.

Mentioning the reflective glasses used for the louvers is a beauty to behold. Beautiful but matured, the louvers authenticate the liberality of members in giving whole-heartedly for the church building. The magnificent structure also has foreign doors in strategic entrances all well fixed. The pillars in the building are to be compared with the ones Sampson pulled down before his death. Sighting the building from afar alone is a satisfaction of God’s presence. The affluence the pulpit area carries weighs no less than millions. The chairs and the tables on it are of no less value. The cost of the lectern at the pulpit area worth over four hundred thousand naira as was jointly donated by three members of the church. What a sacrificial giving!

A cursory look into the building, one would have concluded that it was the contributions of politicians in the church but when Century Newsfront interacted with Elder Idongesit Silas, he said it is basically the contributions of devoted members that brought the building to this enviable height, “we do not have volunteers elsewhere except the sacrificial contributions of members and donations from sons and daughters of consolation in the church. The fence of the church is more or less an epitome of longevity and defense, pointed yellow and designed, the fence in its own capacity adds more beauty to the building with two large vestries for the ministers. The gate of the building, how strong and well founded, it is demonstrated the level of security expected especially with the building of a permanent gate house. The first contractor of the building, Late Elder Udom Etok who planned the church surrounding did it in such a way that the church premises still large enough for parking, movement and even for building a mission house. Lauded and cherished by all, the edifice stands tall to be dedicated to the Almighty God. The church leadership invites dignitaries from far and near as the Executive Governor of Akwa Ibom State, Deacon Udom Emmanuel, men of God, political class and all to be present at the epoch making events on May 12, 2019.