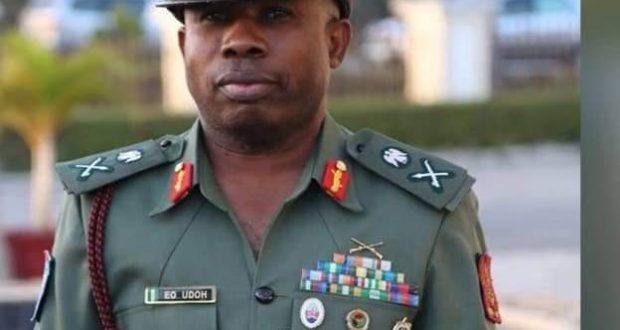 The two were among the seven officers and nine soldiers honoured for their bravery, ingenuity, and exemplary discipline as part of activities to mark the 2020 Nigerian Army Day at Faskari, Katsina State.

In his address at the occasion, the Minister for Defence, Major General Bashir Magashi (retd.), promised that his ministry would not shirk its responsibility of providing adequate support including logistics to the Nigerian Army.

He said, “It is our responsibility to provide necessary support and logistics to enable the Nigerian Army to perform its constitutional roles and duties and we shall continue to do so.”

On his part, the Chief of Army Staff, Lieutenant General Tukur Buratai, who decorated all the honourees, maintained that he had improved on what he met on the ground when he assumed office in 2015. His words, “I have modernized the Nigerian Army. We are able to achieve what we have achieved because of the support and the motivation of President Muhammadu Buhari. We shall remain eternally grateful to him, members of the National Assembly and all Nigerians for our achievements.”

The highlights of the occasion also included the launching of a compendium titled, “The Compendium of Nigerian Army Transformation: The Buratai Years (2015-2020).”

Udoh, the Chief of Training and Operations of the Nigerian Army since July, last year, is an indigene of Ikot Udobia in Etinan Local Government Area of Akwa Ibom State. Until his current appointment, he was the Chief of Logistics, another top staff position at the Army Headquarters, Abuja.

The general had previously held command positions in the field as the General Officer Commanding (GOC) 6 Division of the Nigerian Army, Port Harcourt, and, later, as the GOC 81 Division, Lagos, between 2017 and 2018.

Udoh’s Area of Responsibility (AoR) at 6 Division covered Rivers, Bayelsa, Delta and Akwa Ibom States. His AoR at 81 Division covered several Army formations in Lagos and Ogun States. Before going to Port Harcourt, Udoh had seen action in the war against the Boko Haram insurgency in Borno State as the Chief of Staff and, briefly, as acting GOC of 7 Division, Maiduguri. He rose to the two-star general rank in December 2015.