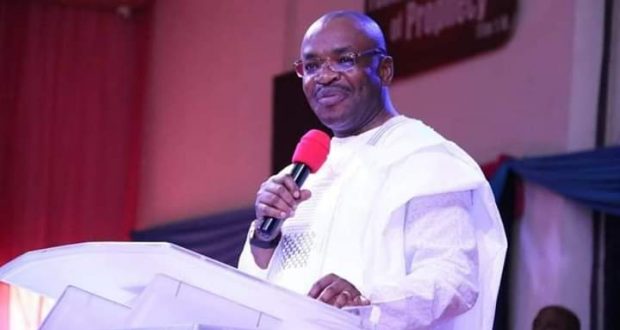 Udom: Keeping the Peace & Wiping Out Traces of Terror

The Cross Road we have come to another crossroad in the annals of our democracy. Why we are down in the trenches at some points is because we, more often than not, fail to take action and rational decision at the appropriate time. In Akwa Ibom State, we have a unique and finest of a gentleman in the saddle of power whose desire to forge a common bond, create a congenial environment for the sustainability of our economy and above all,  peace to reign remains unparalleled.

The question is: does he really deserve another four years term after exhausting the first term? Reasonably, Mr Udom Emmanuel is more than deserving of our support for the second term. This is why. Governor Udom Emmanuel has done much to clear battalions of cult groups inherited from the past administration. These were wildcard cult boys that were recruited, groomed and released by politicians mostly those in authorities to kidnap, maim and assassinate perceived political enemies and anyone believed to create challenges to the political office holders in the top echelon.

It was such a surreal moment and people were literally living in the edge of doom and sleeping with one eye open as fear beclouded the atmosphere; anarchy strutted the whole landscape as even churches were invaded by these hired hooligans who captured their victims and either mowed them down summarily to death or abducted them and demanded for ransom. Some even paid the ransom but didn’t make it alive. Some who made it alive had their limbs chopped off or eyes savagely blew off. This was the era where private businesses were ransacked and destroyed with no compensation. Out of fear, people made an exodus out of the situation, running out and sojourned In strange lands; in self-exile or became refugees from a country where there was no civil war.

It was a time where stationed Investors took to their heels while the would-be investors closed any chapters or hopes of coming in. It was a time in  history were multinational companies could not keep their employees in the state. Some were often ferried via choppers from other states or long buses fully guarded by platoons and masked soldiers to and from work. Again, it was a period where sound bites like “There’s so much hunger in the land.” “My mother is sick in the hospital and I cannot pay the bill” “Who’ll be the next victim of kidnapping or assassination?”, etc were commonplace. Yet, a lot of oil money was unprecedentedly flowing in and gushing in. Today, we’re blessed to have a man whose quest to reverse these negative indicators is sacrosanct and remains what he holds dear in his heart.

In any given society, employment is critical to sustainability, health, and development. One significant aspect of Udom’s administration goals is the creation of jobs through industrialization drive. So far, just three and a half years, we can boast of 14 viable industries established in the state and still counting. This is no mean feat as compared to the previous administration which promised to build 31 industries but ended up with zero in eight years.

Why You Should Go Out And Vote

For those of you who think election does not hold water to you, think about the flurry of kidnapping, cultism that will resurface if you don’t act now. Don’t you think investors will run away again? And if investors run away again then hardship and hunger will resurface. For those of you who developed voting apathy, if you allow mindless politicians to come in, individuals with cavalier mindsets, they’ll plunge us into the precipice.

Think about the stinking, dilapidated educational and healthcare structures that Governor Udom inherited from the previous administration and he’s revamping them. We cannot afford to make such a costly mistake. We cannot become radioactive in poverty, unemployment and educationally backwards. We cannot reject peace and unity that we vouch for and echo every day on the platter of falsehood peddled by hackneyed political office seekers whose intent is to cremate our state, our unity our peace and our economy for their egotistical, narcissistic and corrupt interests.

Stealing And Destruction of Private Businesses

By the way, why should any reasonable persons think of queueing behind people who deliberately destroyed private businesses of their citizens if they could not steal it or take over from their owners by crooked means?

We cannot forget in a haste the destruction of farmland owned by a man in Uyo (Monday Akpautong?) by those in authority. The killing of the Ekpenyong brothers who refused to hand over their sand quarry to the greedy fiends in authority then. This subsequently led to the arrest and detention of innocent people like Dr. Chris Ekong, Fabian Ekpenyong (victims’ brother) who were almost killed in detention while the identified culprits were let off the hook.

We cannot forget the crushing of the AMAKPE Refineries by those who could not establish a single industry while in the government office. The refinery was slated to employ more than 6,000 people in the first takeoff. The saddest part is that, after they truncated the refinery takeoff in 2010, they hired deranged cyber thugs to carry out incessant and strings of campaigns of calumny aimed at tarnishing the image of the AMAKPE Refineries promoters. This was their hallmark, no doubt.

Today we have people who cruise through the network of lies, mountains of mendacity and web of falsehood. I mean people who ride with trucks fully loaded with the baggage of empty promises coming again to take over governance in order to take us a million miles backwards? Indices of their previous stewardship in different strata of government show their incredibly abysmal performance and regrettable leadership. Perhaps, it was God’s plan for Judas to jump off the Divine Ship to absolutely give peace a chance. Sorry, I meant to say, Jonah.

The military and police chiefs, at different fora, told us that since Mr. Udom Emmanuel came to power, Akwa Ibom State has taken back her position as the most peaceful state in Nigeria. On Saturday, I appeal to you, as an apolitical individual, devoid of party affiliation, to queue behind Mr. Udom Emmanuel and thump print for him and his associates so that we can all keep the peace, wipeout and completely obliterate the traces kidnapping and the reign of terror in AkwaAbasi Ibom State.

Itauma is from Eket and writes from Rochester, Minnesota