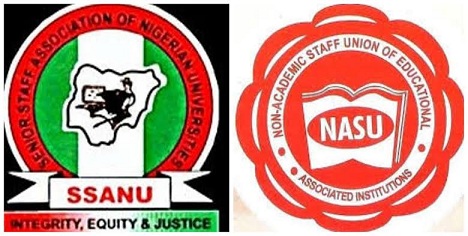 Nonacademic staff of universities has concluded plans to embark on a nationwide strike on February 5, 2021.

The decision, according to the workers, followed a series of failed attempt to draw federal government’s attention to the latent and growing industrial tension in the university system. LEADERSHIP Weekend reports that the aggrieved workers under the Senior Staff Association of Nigerian Universities (SSANU) and the Non-Academic Staff Union of Educational and Associated Institutions (NASU) had last week embarked on a three-day protest over government’s failure to honour the Memorandum of Understanding (MoU) signed with the unions on October 20, 2020.

The National Association of Academic Technologists (NAAT) had on January 4 also issued a 14-day ultimatum to the federal government, threatening to embark on strike if its demands are not met

Addressing journalists yesterday in Abuja, the Joint Action Committee of SSANU and NASU led by the national president of SSANU, Comrade Mohammed Ibrahim, and General Secretary of NASU, Peters Adeyemi, said out of the seven issues under contention, only one was partially resolved. The issues are inconsistencies in IPPIS payment, nonpayment of earned allowances, nonpayment of arrears of national minimum wage, delay in renegotiation of FG/NASU and SSANU 2009 agreement, as well as nonpayment of retirement benefits of outgone members. Other issues include teaching staff usurping headship of non-teaching units in clear violation of conditions of service and establishment procedures, neglect and poor funding of state universities and non-constitution of visitation panels for universities.

The committee said, “Out of the seven issues, only one has been partially resolved while the other six issues have not been attended to by government, three months after the Memorandum of Understanding was signed.” It noted that after the congress meetings held at its branches, 90 per cent of NASU members were in support of a strike while 10 per cent kicked against it.

It stated: “While 83 percent of SSANU members were in support of embarking on strike, 11 percent were against the strike and 6 percent were indifferent. It is in line with the resolution of our members nationwide that the leadership of the joint action committee of NASU and SSANU hereby resolve as follows;

“That members of NASU and SSANU shall embark on an indefinite, comprehensive and total strike with effect from midnight of Friday, 5th February 2021. That two weeks’ notice effective from today, Friday 22nd January 2021, is hereby given to government and relevant stakeholders of this development.”

NAAT president, Comrade Ibeji Nwokoma, also told our reporter onphone that the union members will hold congresses across the state next Wednesday to take a resolution on when to embark on strike following the expiration of its ultimatum to the federal government.