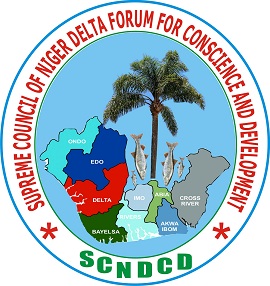 Who is Afraid of the NDDC Forensic Audit? Part Two – Group

We are in a democracy where the will of the people must prevail over the arbitrariness of a few. The resolution of the Niger Delta crises cannot be achieved outside the region and its people. We persist on our call on President Buhari to continue in his candid support to the Honourable Minister of Niger Delta, Sen. Godswill Akpabio in his forensic audit activity, his support for the people of the Niger Delta including all men and women of goodwill in their efforts to bring sanity into the commission, which will culminate in bringing smiles on the faces of every citizen of the region whose lives depend on the fortunes of the region.

The Niger Delta problems did not start with this Administration; President Buhari has taken upon his Administration the patriotic task of ending this. It is rather sad and embarrassing chapter in his administration drive for development, stability, prosperity and indeed peace in the Niger Delta region in particular and Nigeria in general. It is, therefore, our conviction that the current forensic audit in the NDDC will usher in a thorough and holistic resolution of the challenges of underdevelopment and its attendant social, economic and political problems that is rocking the region. Apparently, the Hon. Minister of Niger Delta  Affairs who supervises the activities of the Commission seem prepared to take the bull by its horn and end the era of tokenism and evolve a holistic programme of action and development for the region.

In retrospect and over the decades, Government and preceding Government in Nigeria have had no dull moments in proposing solutions to what has now become a never-ending crisis in the Niger Delta Area. From the Willink’s Commission report in 1958 till date, the terrain is littered with reports of several committees set up by government towards the development of the region all of which have been barely implemented. Indeed, those decades had witnessed agonizing slowness about any development in the Niger Delta. This is why the Supreme Council of Niger Delta Forum for Conscience and Development is rising with one voice, calling on President Buhari to beacon on the Hon. Minister of the Niger Delta Ministry, Senator Dr. Godswill Akpabio to descend with his characteristics bewildering speed to change the cause of history with tremendous significance for the positive future of the Niger Delta people.

The people of the Niger Delta were in a high spirit when the UNCOMMON TRANSFORMER was appointed Minster to oversee the running of the Ministry who in his usual administrative expediency would change for good the fortunes of the men, women, children, the students, the physically challenged, the less privileged and indeed all the forgotten people of Niger Delta Region.

Alfred North Whitehead, a Philosopher, once said, “we live in a day when civilization is shifting its basic outlook, a major turning point in history where the presupposition on our society is structured are being analyzed, sharply challenged and profoundly changed“. What we are expecting now is freedom from poverty and the realization of our dreamed development, an idea whose time is now. The deep rumbling of the discontent of the people of the Niger delta through past years had been the thunder of disinherited masses. But with the current Minister of the Niger Delta Affairs on the saddle, corrupt past officials will fumble, fuse, but the people of Niger Delta will rise from the danger of poverty to the green hills of prosperity and wellness. Or are we not interested in disclosing the windows through which the funds of the NDDC over the years have been steadily corruptly siphoned? Sincerely, we are.

Being a position of a socio-political and socio-cultural organization, Supreme Council Of Niger Delta Forum For Conscience And Development Jointly signed by Obong (Comrade) Ifot N. Ifot, Chairman and Dr. Duncan Osagie, Secretary-General and could be reached through the following phone numbers: 08098034173, 08113652851

Previous: COVID-19: Only Exiting Classes to Re-open – FG
Next: Air Peace threatens to wind up if…