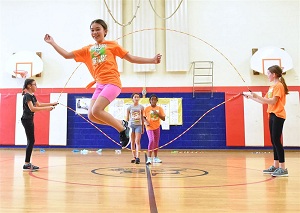 The Nigeria Rope Skipping Federation (NRSF), may not be an old federation in Nigeria but the focus of the organization to raise champions round the nation through rope skipping sport in various categories is well appreciated as the apex body of jump rope/ rope skipping sport in Nigeria is set to host other African nations in a training workshop organized in an effort to showcase new skills among youths in African nations with the understanding of introducing new gimmicks and styles to other rated nations at the training workshop scheduled to hold at the Lagos State Sports Center, Mobolaji Johnson Sports Hall, Herbert Macaulay way, Rowe Park, Yaba, Lagos from Thursday 18th – Saturday 20th April, 2019 from 10am.

In a statement made available through the federation’s secretary general, Mr. Olusesan Olukoya: “all is now set for Nigeria to host the other nations in Africa as delegates from Botswana, South Sudan, Uganda, South Africa, Uganda and Kenya have already picked up their visas to be in Nigeria in April while the West African nations will all be coming by road. The trainers from USA and South Africa have obtained visas as well, so we are indeed ready to host Africa and the world of rope skipping” he concluded.

Apart from the foreign guests coming from around the world of jump rope to attend the timely training in Nigeria, 1,000 school kids/students will be trained as new entrants to the sport. The educational opportunity will also be geared to some over 200 teachers who will be instructed on the techniques of rope skipping so as to ensure that those in the sport will have all the necessary tools to work with many children and families in not only schools but communities as well.

Though it will hold during the Easter holiday, our guests both home based and foreign associates are eager to participate in the timely program and on the follow up plans on the workshop, 10,000 ropes would be needed to commence training in 10 Nigerian states after the workshop at a 1,000 rope per state considering public and private schools in those states to start with.

According to Olukoya, some of the significant objectives of having the workshop are developing talents of African youths that are expected to be at the workshop essentially to help facilitates youngsters with talents with the aim of nurturing them towards self reliance, enhancing physical fitness, good personal growth and development and also to clear the youths off the street with the understanding of preventing them from exhibiting crime device intentions and instead create a better economic and political platform for the youths through sport of this kind.

“Donations received generously from the awards would be used to officially establish the national junior team (Skipping Eaglets) and the senior team (Bouncing Eagles), and also use to get more ropes to schools and communities around the nation of Nigeria” Olukoya added. “So lots of financial supports would be appreciated from well meaning Nigerian, corporate bodies and organizations so as to have the Nigerian teams as well just like other rope skipping nations” he concluded.