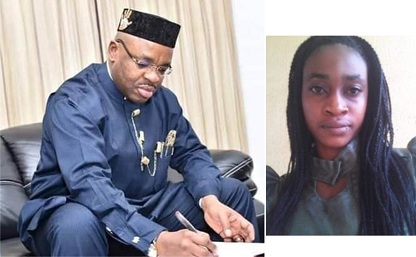 The incidence, which took place last Tuesday September 10 along Ibom Plaza witnessed Mary Ekere being assaulted, beaten mercilessly, stripped naked and dragged into a waiting vehicle by thugs working for the Chairman, Akwa Ibom State Waste Management Agency, Prince Ikim who claims to be working under the office of the Wife of the Governor, Martha Udom Emmanuel.

According to Mary Ekere, she was passing by the Ibom Plaza when she noticed unwholesome activities of task-force operators reportedly working for Ikim. She said that they were seizing some goods belonging to traders making use of the Plaza area, so she decided to take some pictures of the events.

According to her, before she could know what happened, those task-force caught hold of her, beat her up and stripped her naked before throwing her into a waiting vehicle, where she was then driven to their office at Itam. She added that they only spent few minutes at their office before she was taken to Sanitation Court, off Nkemba Street where they met the absence of the Magistrate. She said that when they arrived the court premises, Ikim boys put a call across to the Magistrate who ordered that Mary Ekere be remanded in Prison custody that she won’t be able to make it to the court.

Today, Tuesday September 17, Mary Ekere was brought to the court by the Prison guards in their vehicle where she pleaded not guilty to the charges levelled against her before the court. She was then granted bail, but Prince Ikim who claims to be taking orders from the Wife of the Governor insisted that Mary Ekere be sent back to the Prison even after meeting the bail conditions. She was then taken back to prison custody and is currently at the Uyo Prisons.

Earlier in the day, the Akwa Ibom State chairman of the Nigeria Union of Journalists, NUJ, Comrade Amos Etuk had put a call across to Prince Ikim pleading that one of his members was being arrested by his men. Prince Ikim however assured the NUJ chairman of his readiness to resolve the matter, promising that Mary will be released. But our reporter reliably gathered that Mary was not released as promised by Prince Ikim.

One of the judiciary workers who confided in our reporter said that that’s how Prince Ikim always behaves. He said that the activities of those thugs working for Ikim are becoming alarming these days, noting that they bring all sorts of innocent people to be arraigned on daily basis with frivolous charges. He added that whenever he’s being called, he will promise to talk to his boys, but only to be experiencing something terrible than that the next day.

Reacting to the incident, the father to the accused, Hon. Idongesit Ekere said he was shocked by the activities Prince Ikim and his boys, describing it as an unfortunate. He added, “We waited from morning till afternoon for the Magistrate, who came in the afternoon. When she was arraigned, she pleaded not guilty to those charges and was granted bail. They asked me to pay N10,000, which I did and filled the bail form they gave with my passport. The court guy said he was coming to inspect my house, but later came to tell me that Mary will not be released today again as promised that the Magistrate had gone without signing the bail form. So Mary was taken back to prison custody. I took food to give to her at the prison, but they denied me access to her. They said I should give money that they will give her to buy food, which I did. So she is still in the prison,” he told our reporter this evening. Watch out for developing details.