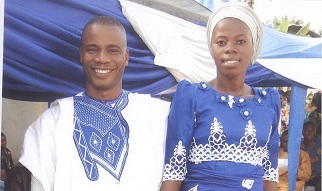 Ifeanyi Says “I Do” to Esther

Ifeanyin Nna and Esther Etim bade a non-negotiable farewell to bachelorhood and spinsterhood in a grand style in Uyo, the Akwa Ibom State capital recently.

At the Deeper Life Bible Church State Headquarters Off IBB Way, Uyo, the duo gathered the crowd to witnesse the solemnization of a Holy Matrimony. Mr. and Mrs. IFEANYI who thanked God Almighty for successful marriage and for the all-round provision, God did that to dignify the occasion.

Mr. Ifeanyi in his speech also stressed on the workings of God to perfect the whole process. He appreciated the display of love, kindness, support and prayer of the Deeper Life family, families of parties, friends and well wishers, “when I saw the crowd, I was afraid because I did not expect many people like this, but this has really portrayed the hand of God in action”.

The Chairman also intimated then couple of the nitty gritty of marriage and how to sustain lasting love in marriage to make it heaven on earth. The man of God challenged them to bind forgiveness on their necks every second  as the only key to enhance peaceful marriage, “there is no angel on earth, if you need angel, you go to heaven, everybody is bound to display one constrain or the other, so, Ifeanyi, do not expect 100% from Esther likewise you Esther of Ifeanyi.

Pastor James however prayed for the couple for an enjoying not an enduring marriage. He prayed also for the awaiting couples for quick manifestation and for some mirage marriages for restoration and revival in matrimonial homes.

2019-03-30
admin
Previous: El-Rufai Plans Annihilation of Christian community in Kaduna State
Next: Menace of having children out of Wedlock